1 & 2 Kings comes alive for Bible academics and the church 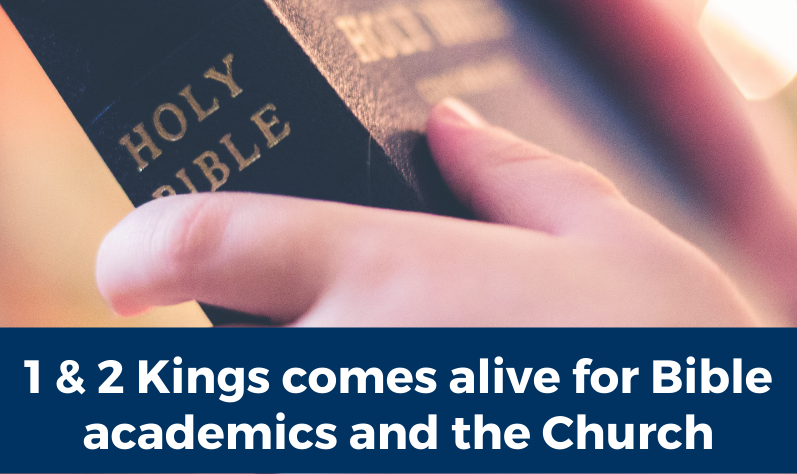 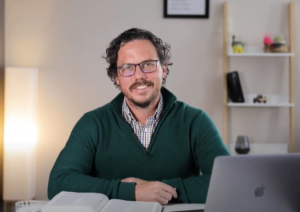 GWC faculty member, Dr Nathan Lovell, is Director of Postgraduate Studies and senior lecturer in Old Testament and Hebrew at the college. In 2019, Nathan was awarded a doctorate based on his thesis entitled, “The Book of Kings and Exilic Identity: 1 and 2 Kings as a Work of Political Historiography”, in which he proposes that 1 and 2 Kings might be read as a work of written history, produced with the explicit purpose of shaping the communal identity of its first readers in the Babylonian exile.:

In 2021, Nathan published a book, “The Book of Kings and Exilic Identity: 1 and 2 Kings as a Work of Political Historiography”, based on his thesis, aimed at providing new students of Kings with an excellent overview and seasoned biblical scholars a framework from which to consider this text with fresh eyes. Nathan says, “I started this project many years ago because, among other things, I couldn’t figure out how to preach on Elijah, who is a prophet to the kingdom that ends up going into exile with no connection to the Davidic promise. I came out with a unique take on how 1 and 2 Kings works as a story of Israel’s history, as well as some thoughts on how covenant, land, national identity, and political authority shape the way the book looks forward to God’s faithfulness, even when we fail. God will do something better than exile in the end!”

Since the launch of the Scripture-teaching You Tube channel, “The Word at Work”, by GWC alumnus Gareth Heuer, Nathan has produced a nine-video series, being “season one” out of three on 1 and 2 Kings that makes this text more accessible to regular Christian folk. Here is an extract from the fourth video:

“Today, we are looking at 1 Kings Chapter 8. In many ways this is the theological heart of the book of Kings. The chapter opens with a scene that echoes the days of old when Moses used to gather all of Israel to hear God’s word around the Ark of the Covenant at the tent of meeting. One day, after seven years of work, the temple is finished and there it stands. It’s magnificent, it’s golden, it’s sitting on top of a mountain in Jerusalem, it’s just spectacular. Solomon gathers all of Israel around the temple to hear God’s word and to celebrate what God is doing amongst them. It doesn’t matter where you are in Jerusalem you would be able to see the festivities. You would see the smoke billowing out from the altars; you would smell the offerings. It would have been a time of celebration and great joy, like a festival.” 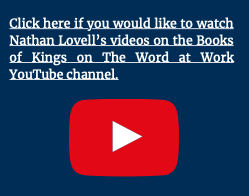 “But one thing remains, as we discovered in the last talk. Actually, the purpose of this temple is that God would dwell amongst his people. So, God has to move in and that is the first thing that we see going on in 1 Kings Chapter 8. The symbol of God’s presence is the Ark of the Covenant. It has existed for a very long time by this point in the Bible. You will remember Moses constructed it as they came out of Egypt, and it’s been around since then. It’s always symbolised God’s presence. Israel took it with them into battle to symbolise that God would be with them. They camped around the Ark of the Covenant as they travelled through the wilderness. It was the first thing you’ll recall in the water when the people crossed the Jordan River and the waters parted and they marched across. They used to keep the Ark of the Covenant in the tabernacle and so now the priests gather together and transport the Ark of the Covenant to its final resting place in the Holy of Holies under the wings of the cherubim in the temple. And, as they do this the human symbol of divine presence is met with a divine symbol of divine presence. The cloud and the glory of the Lord that we are used to from the story of the Exodus, the one that they followed around in the desert; the cloud descends on the temple and fills the temple just like it had done once to the tabernacle as well. And that is it -the temple is God’s permanent dwelling place right there in the midst of his people, ready to be with them.”