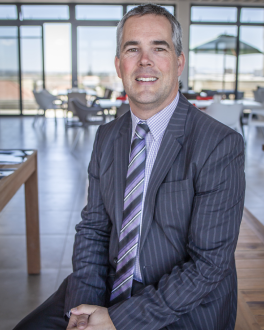 In the middle of 2021, it became clear to Australian faculty member, Stephen Rockwell, that his family’s need to renew their South African visas at the end of 2021 was going to present a serious problem. By July, Australia had firmly shut its borders due to a small increase in COVID- 19 infections and decreased the number of Australians allowed to re- enter the country. Two more problems came to light when Steve consulted with an immigration specialist: His wife Susan’s passport was also due to expire early in 2022 and South African Home Affairs was lagging in visa turnaround time, with the usual two-month visa process now taking around eight months. To make matters worse, around the time of the civil unrest in KwaZulu-Natal, the Australian High Commission in Pretoria shut their doors to all but emergencies. Unsure what to do, the Rockwell family prayed that God would help them find a solution and make the right decision.

Shortly afterward, the Rockwell family received a communique from the Australian High Commission, aimed at encouraging expatriate Australians to “hang in there and stay safe” and announcing an increase in government-initiated repatriation flights for Australians around the world – but none from Africa. However, a few days later, chatting to an Australian friend, Steve heard about a single repatriation flight for Australians in South Africa. He immediately contacted the High Commission, but, needless to say, the flight was already booked solid. Hopefully the Australian government would recognise the need for more such flights out of South Africa.

Then, early in August, Susan received an out-of-the-blue call from a representative from the Australian Department of Foreign Affairs and Trade in Canberra, calling to offer the Rockwell family six seats on the next repatriation flight out of South Africa – if they wanted them. They had been warned about scams like this – Steve took the phone from Susan and was very caustic with the person on the line until it became clear – this was no scam. It transpired that a handful of seats are reserved for allocation to Australians abroad, perceived to be in a vulnerable position. They were given 24-hours to confirm they wanted seats on this flight, scheduled to depart two weeks later. After much prayer and deliberation, Steve and Susan decided they had to catch the flight. It was a tough decision. It was not what they wanted, but it was a miracle they had been chosen. God had answered their prayers – they were spared from becoming illegal immigrants.

Faced with the prospect of returning to Sydney without a home or car, Steve phoned his Australian- based boss with the news of their unexpected arrival. In God’s providence, it so happened that Steve’s sending church were sitting with an unoccupied ministry house. On the turn, the Rockwell’s were granted free use of this home until the end of the year. A few weeks later, arriving at their new home after two grueling weeks in quarantine in Darwin, the family found the house to be furnished with beds made up and a pantry full of groceries – along with flowers and gift hampers. All-in-all, they have experienced an amazing outpouring of love and welcome from their Christian family in Australia.

Steve will remain employed full-time as a faculty member at GWC, lecturing remotely until the end of 2021. GWC’s Academic Administrator Officer, Sigrid Holscher, has juggled Steve’s schedule so that his lectures take place in the early evening, Australian time. Though, he does find himself having faculty meetings and committee meetings in the early hours of the morning. As for future ministry plans, there are several avenues currently being explored and it is the Rockwell’s family’s hope that God will allow them to serve Him in whatever way He chooses best, to the honour of His glory. While it has been a tough and unsettling season, being unexpectedly torn from their lives in South Africa, the Rockwell family are resting in God for the future.